We are fortunate to have a beautiful rose garden within the cemetery which is maintained by volunteers. If you would like to be part of the team that maintain the garden then please do let us know. If you are able to spare a bit of time to carry out pruning and weeding then we would love to hear from you.

Current staffing structure for the District: Neighbourhood Inspectors have been reduced from 9 to 4 and it is hoped that the new service delivery model will be completed by the Autumn. Daventry Police Station will be one of four main hubs for the force in the county where response teams will be based. This is good news for Daventry and the District as there will be more officers based here, albeit covering a large area.  PC’s for Daventry have reduced to five, however PCSO’s have been maintained at six. There is one Sergeant (Sam Dobbs). These officers will only be used for neighbourhood policing issues as there is a separate response team for other matters which arise.

Crime figures in the district are up by 10% as a whole when compared with last year, however it was noted that crime recording has changed. Inspector Byrne asked residents to report all crime, as police resourcing cannot be targeted to specific issues unless the information is there.

There is a gang culture emerging in the County, however this is yet to affect Daventry. 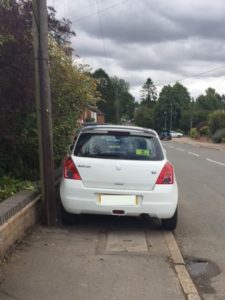 Can we please ask that people do not obstruct footpaths. It can be dangerous for pedestrians / pushchairs to pass obstructions by going into the road and extremely difficult for those less-abled. We appreciate, as with most villages, that they were not initially created with vehicles in mind and parking can be a problem. We ask that you try to be as considerate as possible when parking – please do not park on bends, obstruct driveways etc.

Your next Parish Council Meeting will be on Monday 12th July, 2021

We use cookies to ensure that we give you the best experience on our website. If you continue to use this site we will assume that you are happy with it.Ok
Scroll to top